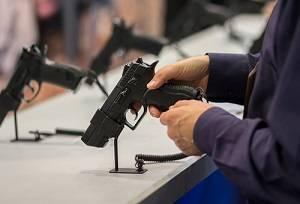 For the safety of the people, Illinois has imposed very strict gun regulations as well as stiff penalties for those who are convicted of violating those laws. Some actions potentially result in multiple charges and therefore potentially multiple consequences if found guilty. Recently, the constitutionality of those penalties were called into question. In the case of People v. Williams 2015, the punishment of aggravated unlawful use of a weapon and violation of the FOID Card Act were put under the microscope, and thus the regulations of weapons charges came into question.

The Argument: The penalties for the statues of Aggravated Unlawful Use of a Weapon (AUUW) and violation of FOID Card Act  were vastly different for two statutes that regulated the same behavior, which in turn violates the “proportionate penalties clause” of the Illinois Constitution. This basically says that if two actions are identical, then the penalties should be proportionate. In this instance, AUUW carries a Class IV Felony punishment and FOID Card Act violations are considered to be a misdemeanor.

The Conclusion: The court ultimately determined that the two charges were not exactly the same, therefore, the proportionate penalty clause was not violated.

It is always beneficial to understand the laws and how they apply. Within each law, there are various stipulations and details that must also be followed. These are the two laws that were mentioned previously, this time with further detail.

FOID Card Act: FOID stands for Firearms Owners Identification. To legally possess firearms or ammunition, Illinois residents must have a Firearm Owners Identification (FOID) card, which is issued by the Illinois State Police to any qualified applicant. Some of the qualifications that one must meet are:

If someone is caught owning or possessing a firearm or like item without the proper identification, even in their home, they potentially can face charges due to a violation of this law.

Aggravated Unlawful Use of a Weapon (AUUW): As we just learned, it is extremely important to have the proper identification available when owning a firearm. This is especially true if you plan to carry your weapon with you when you leave your home. Violations jump from misdemeanors to Class IV Felony charges if caught in public without proper identification. The law states that the following locations are prohibited to carry without identification:

This law does not pertain to the following locations (which are covered by the FOID Card Act):

This law pertains to all of the following weapons:

If you or a loved one are facing a weapons related charge and are unsure of the options, it may be beneficial to seek legal counsel. With a lawyer on your side defending your rights every step of the way, it may make the difference between a misdemeanor or a felony or even between guilty and not guilty verdicts. At Stringini & Garvey, P.C. we have over 65 years of combined experience that we will put to work for you. Contact our Addison criminal law attorneys, serving clients of Maywood, Wheaton, Rolling Meadows, Bridgeview, Cook County, and all surrounding Chicagoland areas. Call us today at 630-834-9595 for your free initial consultation.